Ringette Score Sheet Completion
Ringette PEI Official Game Sheet Reports can be downloaded and printed here
All blocks requiring information should be completed, if there are any issues or appeals we need an accurate record of the game which includes all the information on the scoresheet.
Remember to write legibly 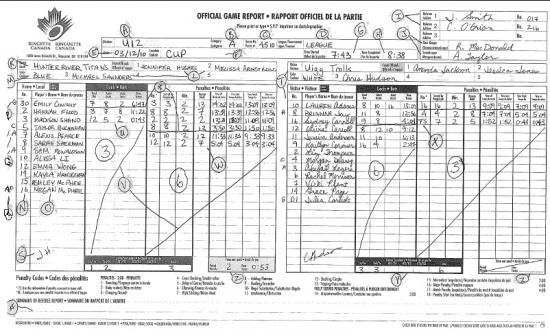 To be completed by the team manager prior to the game:

C - game number is found on the schedule on the website (the ID #), manager should check this before the game when possible

J - Both the timekeeper and scorekeeper need to sign the scoresheet, remember to write legibly

K - Write the name of the home team

N - Indicate the jersey number of each player

O - Write the names of all the players who are present, those who aren’t there don’t need to be indicated or can be crossed

R - Indicate any affiliate player by putting "AP" beside their number, this applies to any player who is not part of your registered roster

NOTE: The home team manager should give the scoresheet to the visiting team manager to complete prior to the start of the game

At the start of the game, the scorekeeper should:

T - Ensure the home & visitor’s team has completed sections K through S, if there are any blanks inform the referee prior to the start of the game

U - For each goal scored:

a - Write the number of the player who scored the goal, as indicated by the referee

b - Write the number of the player(s) who assisted the goal, as indicated by the referee

W - For each penalty scored:

a - Write the number of the player receiving the penalty, as indicated by the referee

c - Indicate how long the penalty is, in most cases it is 2 minutes unless it is a major or match penalty, as indicated by the referee, ask for clarification if you are unsure

d - Using the penalty codes at the bottom of the sheet, indicate by number the reason for the penalty, example: write "2" for a body contact penalty

f - Write the time the penalty starts, in most cases this will be the same as the time off but there are cases when the start of a penalty will be delayed, example: if there are 3 penalties called within a short time span, the 3rd penalty will not start until the 1st penalty is complete, ask the referee for clarification if you are unsure

g - Write the time on the game clock when the penalty finishes, this is usually 2 minutes after the start of the penalty or the time a goal is scored

h - Write the time on the game clock when the player returns to the game, this is usually the time the penalty finishes but not always, see example f., ask the referee for clarification if you are unsure

Z - If a team uses a time out, record the period and the time it was taken, do this for both teams

* - at the end of the first period draw a heavy line under any goals scored and penalties served, do this for both teams

# - this section should only be filled out by one of the referees in the event of a match penalty, nothing else should be written in this section

Manage your identity from the palm of your hand to the top of your desk.